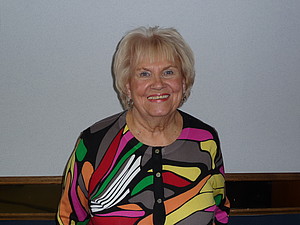 Marnie Eistetter began her career in 1949 as an athlete being coached by Sadie Caulder Knight. In 1971, when her daughters Darcee and Jami joined competitive synchro (now known as artistic swimming), Marnie began her volunteer career. Since that time, she has filled many roles such as Synchro Sask (now known as Saskatchewan Artistic Swimming) board member, treasurer, nominations committee chair, chief scorer, coach, judge, operations chair for Synchro Canada (now known as Canada Artistic Swimming) and the list goes on and on. Clearly, from the amount of time she put in and roles she filled, Marnie is a vital player in the growth and success of artistic swimming in Saskatchewan right up to her passing in October 2016.

Over Marnie’s volunteer years she received many accolades, including Sask Sport Volunteer recognition – 1993 for twenty-two years of service, City of Regina Mayor’s Community award - 1985, Synchro Sask volunteer of year award – for the 1980-81 season, Synchro Canada silver pin – for volunteering at the club, provincial and national level for over ten years, Sask Centennial Leadership medal – 2005, and most recently was inducted in the Saskatchewan Sports Hall of Fame – June 13th 2009.

When asked about her success, Marnie states:

My attitude towards life is to accept each day you live on this planet as a gift and make the most of it. When attempting a job or task which may be insurmountable, don’t think of it as impossible; think of it as “a challenge”. Make each day a celebration of life and if, in some small way, you can help others to attain happiness and contentment – to perhaps reach their goals - then that’s just the icing on the cake!”

It is that sort of attitude that has made the great feats of enhancing the sport of artistic swimming possible.

In 2009, SAS named the annual fall competition the Marnie Eistetter Figures Meet in her honour.