In spite of our arid climate, or perhaps because of it, swimming has always been a popular activity in Saskatchewan. People of all ages, from communities fortunate to have a river, lake or even a creek running through or close by, have pursued the pleasure of immersing themselves in the cooling waters. Because such bodies of water are, by nature, deceptive in current and depth, tragedies occurred as people misjudged the dangers or their own swimming ability. As a result, the need for programs to teach basic rescue techniques and survival strokes soon became apparent.

Canadians adopted a program already well established in England as a means to address this need. The British Royal Life Saving Society award system was introduced in Quebec and Ontario in 1909, but was not established officially in Saskatchewan until 1964. The system was in use well before that time, however, for there were many immigrants from England who were familiar with the program and were anxious to implement it in the province. At the time, all applications for awards had to be sent to England, which was a tedious and time-consuming process. Nevertheless, the Royal Life Diploma was so prestigious that prospective swimming instructors were more than willing to go through the process. The Royal Life program soon became the basis for programs in Canada and the measure of swimming proficiency and instructional qualification.

In the early years, the YM and YWCA's of Canada were the centers for most water sport activities, because the Y's often had the only indoor pools in a community. These centers also became the focus for energy and change as programs developed. In particular, the development of the Royal Life Society program at the YWCA helped to create the sport of synchronized swimming, and became the impetus whereby the sport became a part of both the national and the provincial scenes.

In order to test the swimmers' skill and agility in the water, several "tricks" were included in the Royal Life advanced test requirements, along with proficiency in various strokes. The "Scientific Swimming" section of The Royal Life Saving Society's Handbook of Instruction in its 1955 revision describes movements such as "Sculling Head Foremost in a Floating Position," and tricks such as "Forward Somersaults (Balled-Up)," "Washing-Tub," and "Water Wheel" which evolved from the earlier movements. (112-123). The "Porpoise" is described as follows:

The Swimmer starts by sculling face downwards and head foremost on the surface of the water, then by arching the back, depressing the head, swinging the legs us, he submerges. Continuing the sculling movement under the water he hollows the back and raises the head, causing him to rise to the surface and inhales quickly. He then repeats the movement at least twice.

In spite of the use of the male pronoun (as in the above), such tricks generally appealed more to female applicants, who found them significantly easier to perform than did their male counterparts. The similarity between these "tricks" and present-day synchronized swimming movements or figures reveals the Royal Life Saving Program's influence on the sport as it appears today.

The popularity of these "tricks" and "stunts" led to the organization of a Strokes and Tricks Competition at the Montreal YMCA in 1923 in an effort to "provide a competitive and creative outlet for girls who were not attracted by speed swimming" (Bean 2). This competition is considered to be the origin of the sport of synchronized swimming in Canada, and the basis for the technical or "figures" component of the sport worldwide.

Early competitions in Canada did not include routines or music. The "ornamental" or "scientific" swimming competition (as it was called) included tricks or stunts and strokes that were performed on an individual basis. The official costume was then, as now, a black bathing suit, but with the addition of long black tights and a black cap. Ms. Bean reports that Canadian girls sewed black gym stockings to the bottom of their bathing suits (Bean, 3)

Rules were drawn up and approved by the Canadian Amateur Swimming Association. In the original competitions, five compulsory strokes were performed; propeller, sculling, breast stroke, inverted breast stroke and side stroke, and a voluntary event consisting of five tricks (figures) chosen from The Royal Life Saving Society's Handbook of Instruction (Bean, 3).

In 1924, Quebec held the first Provincial Championship in Ornamental (Scientific) Swimming at the Montreal Amateur Athletic Association pool. Margaret Shearer (later Mrs. Peg Seller) won the championship in 1924 and 1925. In 1926, a Dominion Championship Gale Trophy, donated by Mrs. Frances C. Gale, was presented for "Annual Competition by ladies in Graceful and Scientific Swimming" (Bean, 3). While annual competitions continued in the East, interest did not spread significantly to the West until 1933, when Manitoba hosted the competition in Winnipeg.

Although this type of competition is generally thought to have originated in Canada, similar forms of "rhythmic" or "ornamental" swimming were performed in the United States and Europe. In 1923, the same year as the first Canadian competition, one of the first clubs in the U.S. was founded at the University of Chicago. American programs favoured routine swimming to music, a form of aquatics generally referred to as "water ballet". Featured by groups such as the swimming as the Century of Progress Modern Mermaids in Chicago and Billy Rose's Aquacade, this type of swimming became a favourite entertainment in the 1930's, '40's, and '50's.

Popularized at the Chicago World's Fair, and later through the films of Esther Williams, emphasis was on "show production, extravaganza, and audience appeal…" (Vickers, Teaching Synchronized Swimming, 1965, 1), rather than on technical ability. The April 17, 1944, edition of Life magazine highlighted the new MGM technicolour musical "Bathing Beauty," staring Ester Williams, as "the first colour water pageant to reach the screen" (77). The film featured 46 performers in a pool 90 type of production encouraged thousands of girls to take to the water, and watershows became a part of many swim programs.

Competitive programs developed in the universities in both Canada and the States; however, Canadians emphasized individual competition with the Americans emphasized the team or duet routine. Routines did not become part of the Canadian National Championships until 1948, when a swimmer entering the Gale had to perform a routine (with or without music) in addition to the figures and strokes. In 1949, music was required and the trophy was won by the competitor with the highest aggregate for figures and routine. In the U.S., the first official Senior National Amateur Athletic Union duet and team championships were held in 1946. In 1950, solo competition was added and the Indoor Competition was won by Canadian June Taylor. "Stunts" were not introduced into national competition in the U.S. until 1959.</TD>

At the same time that these competitions were being developed, "aquatic art," another form of the original water acrobatics, was making its debut on the international scene. Beulah Gundling of Cedar Rapids, Ohio, a well-known soloist in the U.S. and a feature performer around the world, joined with her husband, Henry, and Peg Seller of Canada to form the International Academy of Aquatic Art, dedicated to provide a forum for the development of this "art form". The Academy stressed the creativity rather than a sport. Routines were judged on aesthetic choice and thematic interpretation by a panel of art critics at competitions called "Aquatic Art Festivals." Mrs. Gundling's artistic style had a profound effect on synchronized swimming as a whole, and on many Canadian swimmers in particular.

Thus, "synchronized swimming" (a term credited to Norman Rose at the Chicago World's Fair) was influenced by three different trends: the sport of Ornamental Swimming, which emphasized competition that incorporated the skill of stunt execution and the creative experience; Aquatic Art, which stressed the aestheticism of rhythmic movement in choreography with little emphasis of execution; and Water Ballet, which viewed music as a background only and success as commensurate with audience appeal, the show being the only concern (Vickers, 3-4). The Canadian program absorbed all of these influences, and has tended to emphasize each aspect over the years, according to the trends and preferences of the time.

In Saskatchewan, the development of synchronized swimming shows the influence of all three movements; however, early programs probably had more in common with the water ballet approach than the sport or aquatic art concepts. The stunts and strokes learned in the Royal Life programs were more often included in demonstrations and watershows as part of "entertainment" component of the program, rather than as technical challenges. The sheer audience appeal of these "water ballets" or watershows encouraged the development and spread of the sport in the province. 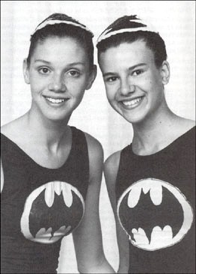