Sadie Caulder Knight was the pioneer of artistic swimming (formerly known as synchronized swimming) in Saskatchewan. Born in Liverpool England in 1899, she came to Saskatchewan with her brother in 1913 to join her family. Sadie was a non-swimmer until her early adult years. The near-death drowning of one of her children prompted her to learn to swim. The classes she took at Regina’s YWCA awoke an interest in and love for a sport she was to remain involved in for the rest of her life. After she gained proficiency in swimming herself, she began to teach others through volunteer work at the YWCA in Regina. Eventually she was hired as a part-time swimming teacher and became full-time director of the YW?s swimming program. Working in a very old building with a pool not much bigger than most motel pools today, she taught hundreds of children each year for more than 30 years.

Sadie pioneered synchro in Saskatchewan in 1941 when she began teaching the fundamentals of the sport, although it was not known by that name at that time. She developed the province’s first artistic swimming program at the old Regina YWCA. In 1951 she began moving into more advanced choreography, using her own money to obtain all the books, pamphlets and films she could get her hands on to further her own, and thus her students, knowledge. In 1956 she took three of her swimmers to represent Saskatchewan at the Canadian Synchronized Swimming Championships for the first time. One of the swimmers placed 6th in the solo event. In the 1957 Canadian Championships the Synchronette team placed third in the team event – only 1.2 points out of first place.

She was responsible for the formation of the first provincial association in the late fifties and when the first provincial championships were held in 1958, ‘Cauldie’s Girls’ won easily. The Synchronettes competed every year, until Sadie’s retirement in 1965, always placing swimmers in the top ten in Canada, and occasionally bringing home silver and bronze medals. This is particularly remarkable when one considers that her swimmers were all trained in a pool that was only 13 yards long, 9 yards wide and 6 feet at its deepest point. During her final years of coaching, Saskatchewan swimmers were always in contention for the top spots at the National level – a feat that was not equaled for many years thereafter.

After her death in September 22, 1971, at age 72, a group of former swimmers established a trust fund in her name. Saskatchewan Artistic Swimming now administers this fund, and annually presents a “Coach of the Year” award and accompanying Bursary in Sadie Caulder Knight’s memory. In 1972, Canada Artistic Swimming (formerly Synchro Canada) presented her, posthumously, with their Distinguished Service Award for her contributions to the development of artistic swimming in Canada. “50 Years to Gold”, Synchro Saskatchewan’s history book, is dedicated to Sadie Caulder Knight and Sandra Roberts, Sadie’s granddaughter. The dedication includes this reference… “Between them, this grandmother/granddaughter combination has provided the momentum and dedication that has made synchronized swimming a vital and successful part of the province’s sport community.”

It should be noted that Sadie gave the same attention and devotion to the hundreds of students who never won championships or who didn’t gain the eye of the public. Sadie spent as much energy and time on the three annual swimming shows presented by her students in the YW pool as she did on the routines of those competing on the National level. Each youngster who passed through her hands was treated as an individual. Her philosophy is best described in her own words: “it isn’t just a case of teaching people to swim – it’s getting to know people and getting to know children. In the dressing room and in the showers they’d say “what do you think about this Cauldie?? and first thing I knew I’d be right in there with them.” It is difficult for those who knew her to speak of Sadie in anything less than superlatives. To know her was to love, respect and admire her. Knowing her made a difference in the lives of all her students. 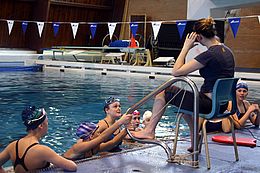